Very few people can take the SATs or ACTs for the first time and do well. Most people naturally suck. It's not your fault. The mismatch between our education system and the test itself makes it only natural that you bomb it.

Most students, especially when math isn't their strong suit, get through math class by blindly repeating steps for any given problem type. They take notes on what the teacher does and imitate the exact process without a full understanding of why they're doing each step. Over the years, I've seen thousands of irrelevant steps made by students who had no regard for what the question called for. It's like watching a robot recite a script: if you see this, then do that, no matter what.

While regurgitating steps might get you through math class, where topics are covered one at a time, it most certainly won't work on the SATs. Most SAT questions do not involve just one topic. They combine algebra, geometry, arithmetic, and statistics concepts, two or sometimes three at a time. As a result, you can't rely on a set of steps for any given question. Yes, there are common problem types that involve the same concepts and tactics, but even then, the steps are never exactly the same. 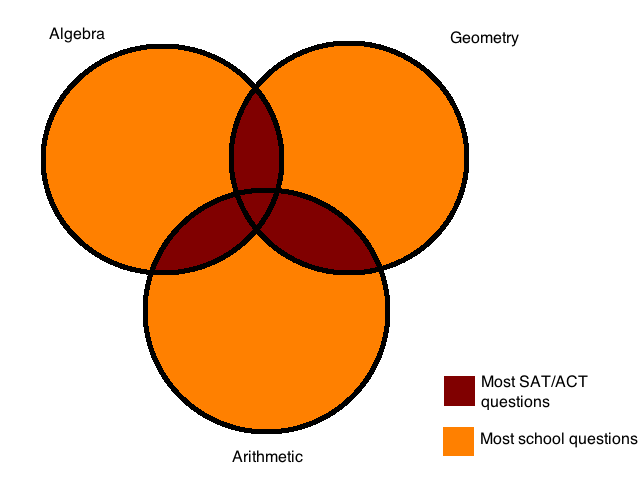 You must force yourself to integrate concepts and problem-solving from various topics. Rely on your own thinking, not someone else's.

2. You're not exposed to grammar in school

Grammar isn't taught in most schools. Most students rely on their "ear" for what sounds right and what sounds wrong. The problem is that English can be a very deceiving language. How we speak in conversation is not always grammatically correct. For example, most native speakers will say one of the following:

However, the correct version is

Because in order to fully understand and work with something, you must put a name to it.

There was a study done where participants wrote down their emotions as they went through different situations. Anger. Fear. Joy. Anxiety. The study found that just labeling what they felt helped them to define and gain control over their emotions.

In the same way, you have to learn the terminology and rules governing grammar so that you can gain control over them. Only then will you be able to apply them.

3. Reading is made out to be subjective

It seems that all English teachers have conspired to get students to participate more by telling them that there is no right or wrong answer, that literature is open to interpretation and opinion. Well, that's gone too far.

There ARE correct answers and not everything is open to interpretation (much less than you've been taught to think).

The SATs test you on only those elements that have clear answers, precisely the ones you spend the least time on in class. What is the main idea? What is the author's tone? Why did the author include these lines here? These are not questions of opinion. They are questions of reading comprehension. Did you actually understand the question or are you just making stuff up, like you do to fill up space on your essays?

The types of questions on the SAT aren't the ones you can spend 45 minutes of class time having an open debate about.

Change your mindset now. Approach every SAT reading question like it has one and only one answer, because it does.

4. You've always been given too much time

Simply put, the tests you take in school typically allow you more time than the SATs do. Ever try to write an essay in 25 minutes at 8am? Well, that's the first section on the SAT. If you're not writing so fast your wrist hurts, you're doing it wrong.

The only way to get used to the timing is to put yourself under pressure in the same conditions.

5. You don't get partial credit on the SAT or the ACT

On both the SAT and the ACT, you get 1 point for answering a question correctly, regardless of whether it was easy or hard. The questions aren't weighted. That's why the easy questions are more important than you think—they're the ones you can actually handle, so you must focus on making the most of them. An easy question you make a silly mistake on is just as bad as a tough question you have no idea how to do.

See, in school, most teachers give partial credit. It makes sense to give the tough questions equal consideration because you'll squeeze some points out of them even if your final answer is wrong. But on these standardized tests, you don't get any points for almost getting the right answer. If you performed 5 out of 6 steps correctly but messed up on the last one, you get no credit.

Learn to identify and accurately solve the easy to medium questions. If you're going to get something wrong, get it wrong because it's a tough question, not because you didn't prepare for the questions within your ability.

6. You don't have the stamina

In this age of distraction, many students just don't have the focus to work on one thing for 4 minutes, let alone 4 hours. What a lot of people don't realize is that the SAT is just as much a test of endurance as it is a test of knowledge. When you get to the second half of the test, sitting still to do math problems can seem like torture. It's at this point that stupid mistakes happen and scores drop.

One student recently asked me why he was consistently doing poorly on the reading section in the middle, the one with multiple passages. Keep in mind there are three reading sections. He found it odd that he did well on the first and last sections, but not the one in between. "Is that section supposed to be harder than the others?" he wondered. The answer is no. Question difficulty is spread equally across all three sections. The reason the middle section feels more difficult is because it contains multiple long passages. The first and last each contain just one long passage. When you're in the middle of the exam, with seemingly no end in sight, having to read two long and boring passages can seem like a death sentence. Your brain turns off and you just want it to end.

If you haven't practiced the mental toughness to get through it, your score will suffer. Focus is something you can practice, but you have to be willing to put yourself through it. No breaks to grab something to eat. No chances to check your email or watch youtube. You will be without your phone when you take the SAT!

7. You've been allowed to get away with sloppy work