I introduce and cover the features of The College Panda Calculator Program in the TI-84 SAT Math video series. If you haven't seen it already, go check that out first. I go through the following:

This program was specifically designed for the SAT—all its features were created with past questions in mind. We didn't include anything that doesn't help you on the exam. It's the closest thing to a cheat code for the SAT.

When you run it, the first thing you'll see is the main menu.

The program consists of 5 main components:

It's not enough to just have a program on your calculator. You need to know how and when to use it. This workbook, which contains exercises based on past SAT questions, will teach you how to use the program and for which question types. 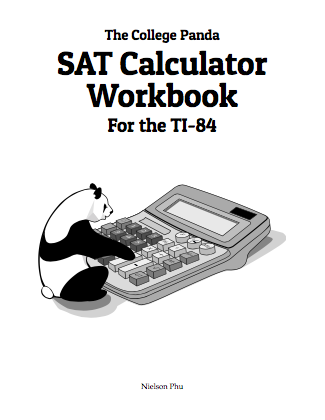 How to Get the Program and Workbook

The Calculator Program and the Workbook are special bonuses for people who have supported my work. Check out the bonuses page for full details on how to get them.