The dates referred to in this post will be different if you have a newer version of the app. However, the app just cycles through the same questions, so everything in this post will still be relevant to you. You just won't be able to track down questions according to their date.

I've been taking a closer look at the math questions of the day available on The College Board SAT app recently. It's quite helpful and serves as great practice. I highly recommend it. 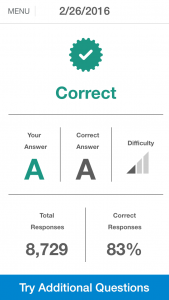 As you can see, the app tells you the percentage of responses that were correct for each question. It also tells you the official difficulty level.

On the whole, the correct response rate was about 62%, which means on average, each question was answered correctly 62% of the time.

After going through all the math questions in the archive, I noticed something peculiar. Some of the questions that were designated as hard (difficulty level 3) had correct response rates that were actually quite high.

On the other hand, quite a few medium questions had correct response rates as low as 32%!!

This discrepancy could be due to several factors:

All factors are probably at play.

In any case, it's worthwhile to look at all the tough questions, whether it's by student response rate or by the official difficulty level, so I'm presenting them all in this post. Enjoy!

As of now, there are only 3 questions The College Board has designated as hard.

Note: This question was modified slightly for clarity. The College Board did not do a very good job in designing this question.

Tonya hits a golf ball from an initial height of 10 feet. The height of the golf ball, \(h\), in feet above sea level, \(t\) seconds after the ball was hit, can be modeled by a quadratic equation. If the golf ball reaches its maximum height of 74 feet exactly 2 seconds after it has been hit, which of the following equations represents this relationship?

The temperature \(T\) in degrees Celsius of a chilled drink after the drink has been sitting on a table for \(m\) minutes is represented by the function below.

What is the best interpretation of the number 32 in this context?

For more challenging questions, I highly recommend my SAT Math book. Check it out.