This post will help you figure out whether you should retake the SAT, whether you were disappointed the first time or simply feel you could do a lot better the second time around.

There's a variety of factors to consider, and the decision to retake ultimately depends on your unique situation, so I'm simply going to walk you through the decision process I use with my own students and through that, you'll hopefully be able to make your own judgment. But before we get to assessing your situation, there are some general guidelines to consider. 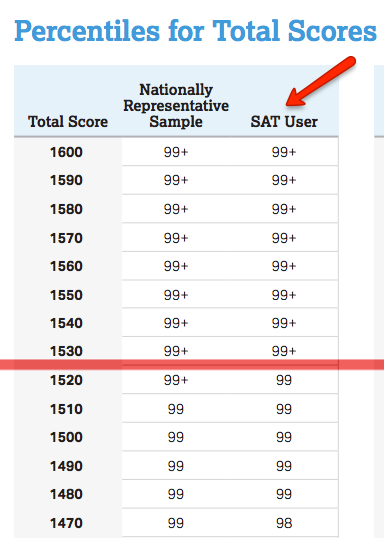 The SAT User Percentiles are what matter since they're based on the actual scores of students. The Nationally Representative Sample is pretty meaningless. A student's percentile represents the percentage of students whose score is equal to or lower than his or her score. So if you scored a 1520, 99% of the students scored the same or lower. Therefore, the top 1% scored at least a 1530.

Scoring in the top 1% is more than enough for any university out there, including the Ivy League. To use Harvard as an example, the 25th percentile for admitted students on the SAT is about 1470; the 75th percentile is about 1570. A 1530+ is in the upper end of that range. You would be doing yourself a disservice by retaking a score this high, not only because it would be a waste of your valuable time but also because you'd be putting yourself in serious danger of scoring lower. At that level, the curve is so sensitive that one or two questions can mean the difference between a lower score and a higher one.

Once you have a 1530+ (~34 on the ACT), the attention of the admissions officers shifts to the rest of your application.

According to the admissions statistics at top-tier universities, higher scores are strongly correlated with higher admit rates. If higher scores are always better, then wouldn't this contradict our first rule above? We'll get to that. Let's first look at the data.

The following is Brown University's Class of 2020 (source here):

As you can see, there IS in fact a difference between an 800 and a 760, or a 36 and a 33. The higher your score, the higher your chances of getting in. This may seem obvious, but I can't tell you how many students get complacent with their scores and their studying. Aim high and put the effort in. A lot of students who SHOULD retake the test often don't because they don't believe an extra 100 points would make a difference in college admissions. Well, it does.

At this point, you might be asking If higher scores are so much better, why shouldn't I retake a 1530+? There are a couple reasons. First, do not confuse correlation with causation. Just because Stanford applicants with an 800 on SAT Reading are 71% more likely to be admitted than those with a 700-790 does not mean that an 800 on Reading causes the entire 71% increase. To use grades as an example, those who get an 800 on Reading likely have higher grades on average than those who don't, and that accounts for some portion of the increase.

Second, the statistics don't give us the full picture because of the way the applicants were categorized. Stanford compares 800 scorers with those in the 700-790 range and Brown compares 800 scorers with those in the 750-790 range. What we don't get to see is the admit rates for 800 vs. 790 vs. 780 vs. 770, etc. If we did, the differences in admit rates would be less pronounced. So yes, the statistics definitely indicate a clear preference for very high scores, but the benefit of a few extra points is not as dramatic as it might appear when you're already at a 1530+.

Another reason you shouldn't retake a 1530+ is the time and effort it takes away from the rest of your application. When you're juggling a full course load, captain of varsity tennis, and studying for 6 APs, you don't need the stress of SAT prep for the sake of another 30 points. The other aspects of your college application should take priority—personal essays, grades, extracurriculars, etc.

The takeaway from all this is that you should be retaking the exams to get the best score you possibly can because it will make a difference. But once you've reached a 1530+/34+ (this applies only to the top universities), your time and effort is better spent elsewhere.

3. Most People do Better on a Retake

Most students are nervous and don't know what to expect when they take the test for the first time. They may not be aware of the pressure and the timing or they just might not be fully mentally engaged. Once a student gets past that initial experience, however, a retake usually goes much better simply because of the newly established comfort level.

Furthermore, many of my students have said that after the first test, they naturally learned to tweak certain things, whether it be time management, what questions to skip, or their approach to certain question types—things they only fully internalized by taking the SAT under real conditions. These "test-taking" factors should not go overlooked; testing experience matters a lot more than you think. In fact, I would say that over 80% of my students have improved after the first test.

Most students are aware of this guideline. Take the test more than 3 times and admissions officers will start to think twice about your abilities. Even if you do well, some will view you as a score-obsessed student with nothing better to do.

Even though you'll likely score better on retakes, make sure you put in enough preparation before a retake to justify it. A lot of students retake the SAT before they're ready, get the same score, and end up having to retake it again.

If you still can't get what you want after 3 takes, you're probably not going to score much better on the 4th take.

B) Your Decision Process

At this point, you might be thinking, "Ok, I don't have a 1530 and I haven't taken the SAT 3 times yet. Given guidelines 2 and 3 above, it looks like I should retake. No brainer." But hold on! We haven't yet considered your particular situation. A lot of students actually don't need to retake, even if they would score higher by doing so. For a final decision, follow the steps below:

1. Figure out your target score

Now google your school's SAT/ACT statistics. For example, if Carnegie Mellon was one of my target schools, I would google "Carnegie Mellon SAT Statistics". Click on any links pointing directly to the school's official website and try to find out what the 25% and 75% percentile scores are.

If you can't find them on the official university website, try college database sites like College Data, College Simply, or Niche. Just keep in mind these sites aren't always up-to-date.

Once you've found the statistics, you want to focus on the scores at the 75th percentile. If you want to have a solid chance of getting in, your target score is one that's a little less than the 75th percentile (~65th percentile). Obviously, your chances (and thus your target score) will be affected by the rest of your application, but in general, the 65% percentile is what you want to shoot for. The people who get in with much lower scores will be those who have hooks (recruited athletes, minorities, legacies) or those with otherwise very strong applications (incredible extracurriculars).

Now, Carnegie Mellon was nice enough to publish statistics with 25%-75% percentile ranges for each of its schools, but not all schools do, so you might need to come up with estimates based on your research.

Make sure to do the research and work out your target score. If you've already exceeded your target score, there's no point in retaking the test. Conversely, if you haven't reached it, you should be more open to doing so.

Not getting your target score does not mean you won't get in. Your target score is just that—a target, a nice goal to have. It's a good way to gauge whether you should be retaking the test. It's not something that should stop you from applying to colleges you have a chance of getting into.

2. Reflect on Your Test Day Performance

Think about why you got the score that you did. Was it because of silly mistakes? Did you run out of time? Was there a concept that you entirely forgot? Or did you just have a bad day? The answers to these questions help indicate your potential for improvement the next time around.

If The College Board released the questions for your particular test date, you'll want to look back at them. Figure out what went wrong.

If you got quite a few easy questions wrong, you could probably improve just by being more careful and reinforcing the basic concepts. If you got hit by the hard questions, then it'll be a lot tougher for you to improve because it takes a lot more practice and study to get those questions right.

If you walked in unprepared or felt that you didn't perform up to your usual standards, a retake might be worthwhile.

Last but not least, think about your priorities. If you're anything like the typical high-school go-getter, you're probably busy juggling extracurriculars, AP's, and your classwork all at once. Do you have the time and effort to devote to SAT study? As I mentioned before, a retake is a bad idea if you can't study enough to make it worthwhile.

Hopefully this post has given you some things to consider when it comes to retaking the SAT. Unfortunately, there isn't a black and white way to decide whether it's worth it. You'll have to weigh the above factors and decide for yourself. My hope is that after reading this, your decision will be an informed one.