All the questions in this post are official ones sourced from The College Board's question of the day app. The dates referred to in this post will be different if you have a newer version of the app. However, the app just cycles through the same questions, so everything in this post will still be relevant to you. You just won't be able to track down questions according to their date.

The other options aren't necessarily true and can't be proven with just the information given.

The answer is C.

If this is completely new to you, I highly recommend that you read up on synthetic division and the remainder theorem. I cover both topics extensively in my math guide. 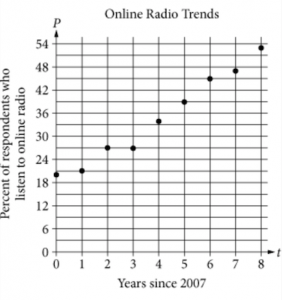 Each year from 2007 to 2015, a group of people were selected at random and surveyed about their use of online radio. The survey asked respondents whether or not they listened to online radio in the last month. The scatterplot shown gives the results of the survey, where \(P\) represents the percent of respondents who reported listening to online radio and \(t\) represents years since 2007. Which of the following equations best models the relationship between \(t\) and \(P\)?

If you haven't worked with scatterplots before, it's simple. Each dot represents a data point. For example, in 2015 (8 years since 2007), the percent of respondents who listen to online radio was 53 percent. 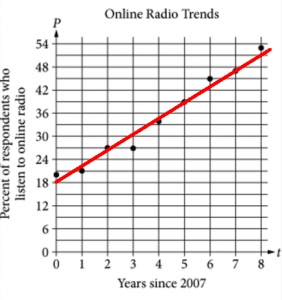 Now we can use point-slope form to find the equation of the line:

The closest answer choice to our equation is D.

A restaurant chain with 8 locations wants to introduce healthier options to its menu. In order to determine customer preferences, the chain will offer three new healthy options for a two-week period at all of its locations and analyze the percent of total orders that include at least one of the new healthy options. Which of the following research designs is most likely to produce valid results?

In statistical experiments or studies, you want to keep the goal in mind. It's important to perform the study in a way that gives you the most accurate data possible as it relates to the goal.

The goal in this question is to see which of the new healthy options the restaurant's customers prefer. Now if you think about it, the most accurate data would come from a study that

The answer is A. 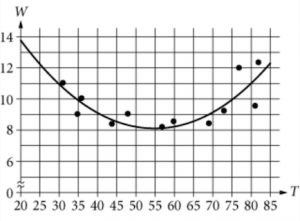 The scatterplot above relates a certain household's daily electricity usage, \(W\), in kilowatt-hours (kWh), to the average temperature for that day (24-hour period). A quadratic function that best fits the data is modeled in the graph above. Given that \(T\) represents the average temperature for a specific day, in degrees Fahrenheit (\(^\circ\)F), which of the following is the best interpretation of the vertex of the best fit curve in this situation?

Think of the vertex of a quadratic as the "midpoint"—the graph is symmetrical on either side of it.

This means the household uses the least amount of electricity (8 kWh) when the average temperature for the day is 55\(^\circ\)F.

The answer is D.

Note that answers (A) and (B) are wrong because they deal with the \(y\)-intercept, not the vertex.